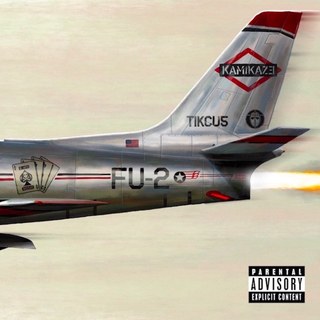 Crawling out of the studio, Marshall Mathers is definitely selling redemption for his last album… and “Kamikaze” is following through.

Eminem steps up his game with the new album.  His artist choices for collaboration all highlight the message and mood of the songs.  The greatest combination is featured on not one, but two songs.  Eminem taps crooner Jessie Reyez  to sing on “Good Guy” and “Nice Guy.”  Her scratchy, bluesy voice acts as a nice compliment to Eminem.

Other notable tracks include “Stepping Stone” and “Fall.”

Though I’ve never been a huge Eminem fan, I have to give credit where credit is due.  While others were blasting him on social media, Eminem chose a more productive and artistic manner to respond.  Instead of getting involved in a social media war, he used his talent.  Eminem, for better or worse, has always been able to use his rap to evoke and provoke emotions.  He constantly pushes boundaries and his audience’s perception of him.  Good art should do that.  Good art should make you question.

Overall:  This album deserves a solid 8 out of 10.  (Plus these are just great jams for the gym.)